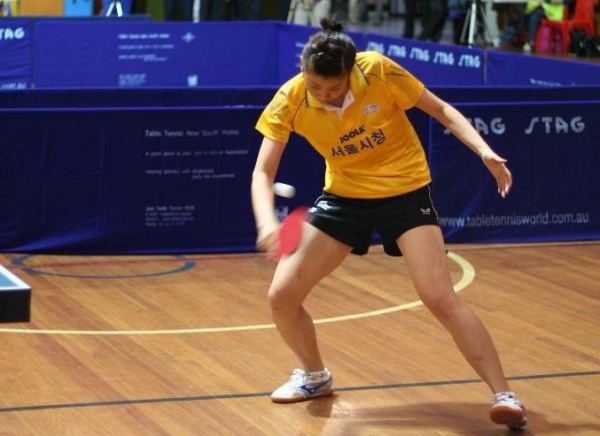 If you are reading this article, there’s a good chance that:

What I’m going to do in this article is explain in simple terms how long pimples work. By the time you have finished reading you should have a clear grasp of what is happening out there on the table when you use your long pips.

The first thing to understand about long pimples is this – long pimples are predictable. Forget what your friends, opponents or anybody else has to say about how confusing and random their effects are – it’s all garbage. Once you understand how they work, long pips are entirely predictable. IMPORTANT!! – they don’t always work the same as inverted rubber – but they do always do the same thing. Burn that into your brain and you’ll have made a good first step to getting the hang of long pips.

I’m going to explain to you about how the typical grippy long pip rubbers work. I’m not going to worry about frictionless long pips – they have been banned by the ITTF and you won’t be seeing them again anytime soon. At any rate, they were predictable as well (in a different way), except for the versions with grippy tops and slippery sides, or slippery tops and grippy sides. But now that they are all gone, I’ll stick to explaining normal grippy long pips, where the pimple tops and sides are all more or less the same friction level.

Let’s start with the classic scenario, where your opponent has topspinned (or looped) the ball at you, and you chop the ball with your long pips. Take a look at the animation below, then read on.

The picture really says it all, but I’ll add a few clarifications.

Now let’s look at what happens when you play the same sort of stroke (another chop), but against your opponent’s backspin ball. As you can see from the animation below, the results are very different.

Some points to note:

OK, now let’s reverse the direction of your own stroke, and see what happens. I’ll start with you playing an upward, loop style stroke against your opponent’s backspin ball. Look below to see what the result is.

Now let’s see what happens if you play a loop type stroke with your long pips against a topspin ball.

Finally, let’s take a look at one of the advanced aspects of using long pips – the ability to kill the spin on the ball when your opponent doesn’t expect it, returning a sneaky float ball. Again, I must point out that although the long pips don’t kill the spin the same way as inverted rubber does, they are totally predictable in how they work – you just have to know what is going on.

Take a look at both animations below – the idea is the same for both.

Obviously, this article isn’t the complete guide to long pips. There’s a lot more to using them successfully then just understanding the basics, but knowing the fundamentals is essential if you are going to be a good long pips player.

An expert long pips player can vary the amount of bending of the pips to increase or decrease the effects, twiddle his bat around to use the other inverted side, or even adjust his swing speed and amount of wrist he uses to completely bamboozle his opponent.