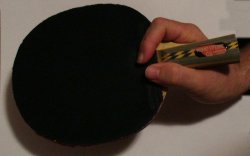 As the name implies, this grip is similar to holding a pen for writing. The thumb and index finger hold on to the racket handle, while the other three fingers curl around the back of the racket.

The photographs show one way that the thumb and forefinger can be held, and two versions of the way the three remaining fingers may be held. There are often many minor differences in the way players place their fingers for this grip, although the overall grip is still considered the traditional Chinese Penhold. 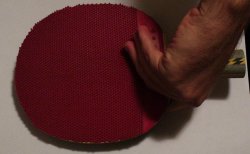 This grip allows the wrist to move quite freely, which will give good forehand strokes and all types of serves. It also allows the player to block and push easily on the backhand side.

Another advantage is that the player does not have a crossover point where he must decide which side of the bat to use, since the same side is always used to play all strokes.

It is not easy to perform a consistent backhand topspin with this grip, since the player is required to bend his arm quite unnaturally. The amount of reach on the backhand side is also less than that of the shakehand grip. Because of this, most attackers who use this grip cover most of the table with their forehand, which requires fast footwork and a lot of stamina. 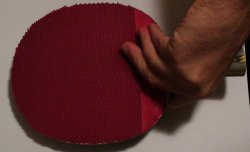 What Type of Player Uses This Grip?

This grip tends to be used by players who prefer to stay close to the table and push or block with the backhand, and attack with the forehand, either with drives or topspin loops. The Chinese are known as being the best exponents of this style, hence the naming of the grip.

There have been less than a handful of world class defenders that used this grip, due to the lack of reach on the backhand side